Siddha refers to a liberated soul, while chakra means wheel. It is believed that worshiping Siddhachakra results in freedom from the cycles of life within a universal ‘wheel’ known as nirvana. It also means a ‘circle of perfection’. Navapada means ‘nine petals’ in reference to the centre of the yantra, while Navadevta means ‘nine deities’.

Siddhachakra most likely originally had only the Panch Parmesthi, Arihant in the center and the other four in petals in four different directions. It may have been inspired from Namaskara Valaya based on the Namokar Mantra as in some older Siddhachakra. The four last lines describing phalashruti (benefits) are depicted in addition to the petals at the four corners. They are described by Acharya Hemachandra in Yogashastra. He also noted that Vajraswami (BCE 57 – 57 CE) derived it from the lost Vidyanupravad parva text.

There are two types of Siddhachakra. The small types have only a central part depicting Nav pada which only includes Arihant, Siddha (liberated souls), Acharya (leaders), Upadhyaya (teachers) and Sadhu (monks) along with DARSHAN, GYAN, CHARITRA and TAP which are the pillars of Jaina religion . Large types includes all of the structures described below called Brihad Siddhachakra or Siddhachakra Mahayantra. Small types are found frequently in Jain temples and in carvings while larger ones are found in brass plate form or made of different lentils .

KALASHA
A Kalasha is depicted as a pot with a large base and a mouth generally covered with a lid or topped with a coronet of mango leaves and a coconut. It is decorated with clothes and ornaments in images. Two eyes are depicted around the Kalasha, symbolising right faith and right knowledge.
At the neck of the Kalasha are nine small pots known as Nav Nidhi which describe nine kinds of wealth or treasures. Nine shrines dedicated to Navagraha are at the base of Kalasha which indicate nine ‘cosmic influencers’.

LOTUS
At the core is a fully blossomed lotus with many circles of petals marking different concepts in Jainism. Navpada (Nine elements) is at the core surrounded by circles of petals called valaya. There is variation in the number of circles made by the petals in different images but generally there are ten circles.

Navapada is the core of the lotus. Navapada includes five supreme beings having virtues, Guni or Panch Parmeshthi, and four right virtues, Gunas according to Svetambara tradition. Their attributes are described in 108 scriptures

REWARDS OF WORSHIPPING SIDDHACHAKRA
SIDDHACHAKRA PUJAN
It is a temple ritual. The ritual lasts for half a day in which a whole Siddhachakra is created on a floor using lentils. This PUJAN is celebrated with great devotion by Jaina Shravasti. Entire family and Sangha are invited to participate in this ritual. Mantras are recited along with performing puja starting in the centre of the Siddhachakra and moving towards the outside.

The rationale behind performing this poojan (worship) is usually to gain either intense happiness or good physical health alongside the karmic benefits of performing any Jain pooja. Both of these efficiencies are chartered by the King Shripal and Queen Mayanasundri story.

The Yantra depicts the whole Jain Dharma, the principle nine elements (Nav Pad) and the protective deities. The main section is in the form of an auspicious pitcher (Kalash). It has two main componenets. the first is the core, Nav Pad, which consists of circles 1 and 3, and represents the standard (stand-alone) Siddhachakra, which is commonly used in poojas. The second main component is the protective rings of deities. The focus on these protectors makes the worldly benefits of the Siddhachakra more understandable and attractive.
Arihant Prabhu ni agnya Virudh Kai kehavayu hoi to man, vachan, Kaya thi Micchami Dukkaddam. 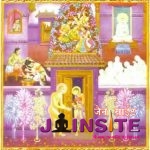 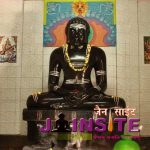 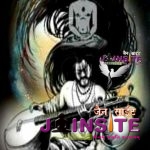 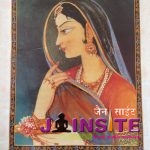 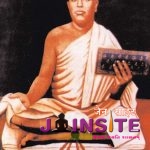