HISTORY ABOUT THE IDOL OF LORD NEMINATH

Once, in the Samavasaran of Lord Neminath, King Indra with folded hands asked the question, “O Lord! What good deeds had Gandhar Vardatt done in the past that he got to become a Gandhar?” The Lord, for the welfare of the Bhavya Jeev (those that can attain Moksha), replied:

“In the previous Utsaripini (the ascending time cycle), the 3rd Tirthankar Lord Sagar was giving Deshna (sermon) to uplift the beings during which he explained the structure of the universe and the entire cosmos comprising of 14 Rajlok (geography per Jainism) as well as the nature of Moksha. Upon hearing the sermon of the Lord, the Indra of the 5th heaven, known as Brahmendra, after realizing the futility of the materialistic pleasures of the heaven, became inclined to obtain the eternal happiness of Moksha and asked Lord Sagar, ‘O Great Lord! When will I get the bliss of Moksha?’ To which Lord Sagar replied, ‘O Brahmendra! During the next Avsarpini (the descending time cycle), Lord Neminath will be the 22nd Tirthankar and it is during his time that you will become a Gandhar and after guiding various beings on the path to liberation, you will attain Moksha on Mount Raivatachal (Girnar)’. Hearing this, Brahmendra’s joy knew no bonds and he went back to his heaven and began worshipping the idol of Lord Neminath with immense devotion.’ Realizing that Lord Neminath was going to be his saviour and the reason for his enlightenment in the future, Brahmendra, created an idol of him so that he could worship and meditate on Lord Neminath. This idol was created from a precious gem stone called Anjan (black in colour) and embellished with other previous gemstones such as Ratna and Manek. It was so beautiful that it was like nectar to the eyes. He started worshipping the idol with the same fervour and devotion as that of the eternal idols (known as Shashwati Pratimaa). And this devotion towards the Lord in turn led to a purification of his thoughts, his feelings and his emotions, which attained exalted levels. It is due to this superlative state of consciousness that he got to become a Gandhar.”

Hearing this, King Indra told Lord Neminath that, “Through you, we have come to know that this Idol is Ashashwat (not eternal). Until now, we used to believe that it was Shashwat (eternal)”. Lord Neminath said, “O Indra! There cannot be Ashashwat idol in the heavens. Bring that idol over here (i.e. from heaven to the earth).” On Lord Neminath’s command, King Indra immediately brought the idol and gave it to King Krishna. Krishna Maharaja, on Lord Neminath’s consent, got a new temple built beneath the Gnan-Shila and installed the idol of Lord Neminath there. This idol, which is worshipped in all the three worlds of this universe and which is the conferrer of the Supreme Post (i.e. the Moksha), was consecrated by Gandhar Bhagwant using the Vasakshep (sanctified sandalwood powder) of Lord Neminath at the behest of Sri Krishna. And the anointment of the idol was performed by celestial beings and human beings together with the water of Gaj-pad Kund (reservoir). This purity of this water is such that any consuming it is relieved of not only external physical diseases (such as respiratory problems, pregnancy problems, those related to abdomen, mental disorders, etc.) but also diseases of the within – that caused by the Karma. Krishna Maharaja completed the consecration ceremony of the idol of Lord Neminath with great fanfare. This was followed by Aarti of the Lord. Thereafter, he distributed diamonds, precious gemstones, rubies, etc amongst the people. Krishna Maharaja began worshipping the Lord with great devotion on a daily basis.

On that occasion, Krishna Maharaja asked Lord Neminath, “O Supreme Being! Till what time will this idol reside in my temple?” To which Lord Neminath replied, “The idol will remain in your temple until the city of Dwarka remains. When Dwarka city will get burnt, Goddess Ambika will take the idol to a cave of Kanchangiri (Girnar) where it will be worshipped by the celestial beings. After 2000 years of my attaining salvation, Ratnasha Shravak, with the aid of Goddess Ambika, will bring the idol out of the cave and install it on Raivatgiri (Girnar). He will build a new temple and worship the Lord there. Until the end of the 5th epoch of the current time cycle, this idol will stay on Raivatgiri. In this way, this idol will be worshipped on the Girnar Mountain for a period of 1 lakh 3 thousand and 250 years. Thereafter, when the 6th epoch begins, Goddess Ambika will take the idol to Patal-Lok (a region below the earth) and the idol will be worshiped there thereon.” Thus, Lord Neminath narrated the wonderful and mind-boggling history of the idol of Lord Neminath.

The incident that follows is of the time when Girnar Tirth was graced by an idol of Lord Neminath that was made of clay-like material called “Velu” and installed by the King Vimal who was a follower of Jainism. At that time, Ratnasha, who was a native of Saurashtra, had left Saurashtra due to famine over there and was residing in Kashmir. Owing to good deeds from past, Ratnasha had acquired massive wealth then. With an intention to earn meritorious deeds by making good use of his wealth, he organized a Cha-ri-Palit (pilgrimage on foot) Sangh to Girnar and Siddhachalji (Palitana) in the presence and guidance of Shri Anandsuri Maharaj. Ratnasha would resort to the help of Goddess Ambika for overcoming hurdles or obstacles faced on the way. They completed their pilgrimage to Siddhachalji with great joy and then set out for Raivatgiri (Girnar). Girnar is pervaded with divine energy and houses pristine vibrations of Kalayanakas of innumerable Tirthanakaras that have taken place here. The entire Sangha began climbing the mountain of Girnar in order to revel in this divine atmosphere. After worshipping at the place of Kalyanak, Ratnasha proceeded towards the main temple along with the Sangha. On the way to the temple, Ratsanasha noticed a Chattra-Shila (umbrella-like-rock) trembling and he asked Guru Bhagwant the reason for it. Using his Avadhi Gnan, Guru Bhagwant said, “O Ratnasha! You will be the reason for the demolition and the subsequent restoration of this Tirth”. Hearing this, Ratnasha was depressed and after worshipping the Lord from a distance itself, he began to turn back. Seeing this, Guru Bhagwant said, “By saying that you will be the reason for the demolition of this Tirth, the intention was to say that the devotees in your Sangh will be the reason for the demolition and you will be the one restoring it”. Overjoyed to hear this, Ratnasha straightaway headed for the main temple and reached the Lord. He did the Snatra Mahotsav (the celebration of the birth of Lord) opulently. Despite being forbidden repeatedly by the celestial beings, the devotees of the Sangh, who did not understand the language of the celestial beings, were so overcome by the emotions of devotion that they began anointing the idol of Lord Neminath, which was made out of clay, with water from lakhs of urns. Within no time the idol transformed into a lump of wet sand. The people were left aghast not knowing what to do next. Ratnasha understood the situation and in order to restore it, he accepted the refuge of Lord Neminath and there itself, he began the Kayotsarga meditation.

Days passed by and Ratnasha’a perseverance was put to test. Satisfied upon seeing the firm resolve of Ratnasha, Goddess Ambika appeared at the end of one month and said, “O Son! Why do you worry? Why don’t you redo the plaster on the idol and install it again”. Saddened to hear this, Ratnasha said, “O Mother! If I was to redo the plaster on the same idol, it may get demolished again in the future by someone else who too is ignorant like me. Hence O Goddess! Please give me such an idol which cannot be demolished by anyone.” Hearing this, Goddess Ambika disappeared and to test the resolve of Ratnasha, she began inflicting various types of pain upon him. Once again satisfied with his strong resolve, Goddess Ambika appeared in front of him and said, “O Son! I am won over by your firm determination. Ask whatever you desire!” At that time Ratnasha expressed his desire to uplift the Tirth. Goddess Ambika took Ratnasha along with her and showed him various idols made of gems and previous stones in the cave of Kanchangiri located on the Himadri Mountains. Knowing that the coming times weren’t good and that evil was on the rise, Goddess Ambika presented him with the idol that was made by Brahmendra as it was indestructible by iron, stones, fire, water, lighting, hurricanes and even the thunderbolt of Indra. While giving this idol to Ratnasha, Goddess Ambika said, “O Ratnasha! Now tie this idol with a raw jute thread on all sides and without looking sideways or back, take it with you quickly. Please be known that if you were to ever stop and keep this idol on the way somewhere, it would stop at that place only and won’t move further.” Having instructed this, Goddess Ambika went back to her place.

Then Ratnasha reached the temple and kept the new idol at the main entrance of the temple. He then moved the old idol (that had become like a lump of wet sand) and carefully cleaned that place for the installation of the new idol. Then, when he tried to life the new idol so as to bring it to this place, the new idol became still and as told by Goddess Ambika, it didn’t move at all. Gripped with anxiety, Ratnasha decided to forsake all his meals and started praying to Goddess Ambika and became engrossed in her meditation. She appeared and said, “O Ratnasha! This idol won’t move anymore. You should now reconstruct a grand temple with an entrance on the west.” Thereafter, per the instructions of Goddess Ambika, Ratnasha built a new temple and with great pomp and fanfare, he got the idol of the Lord installed at the hands of a number of Acharya. Thereafter, he performed the Astha-Prakari Puja (the eight-fold Puja) with great devotion and sang hymns in the praise of Lord Neminath.

After singing the devotional hymns, he then bowed down before the Lord with five of his body parts touching the ground (known as Panchanga Pranipat) and when his forehead touched the ground, he experienced unprecedented joy with goose-bumps. On that occasion, Goddess Ambika was pleased with his devotion and she placed on his neck a garland made of flowers of Parijat. Ratnasha too felt that his birth as a human was successful and gave donations in the seven Kshetras (seven areas of donation) and earned meritorious deeds. In due passage of time, he will attain the bliss of Moksha with devotion to the Lord. 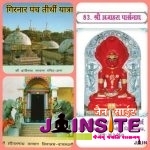 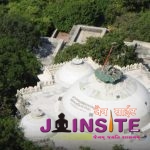 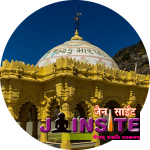 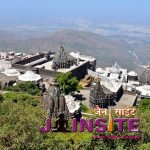 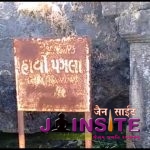