Chapter 29 – Anekäntaväda – An Elephant and The Blind Men

Once upon a time, there lived six blind men in a village.   One day the villagers told them, “Hey, there is an elephant in the village today.” 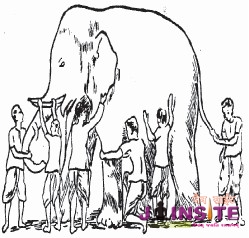 “Hey, the elephant is like a pillar,” said the first man who touched his leg.

“It is like a big manual fan”said the fourth man who touched the ear of the elephant.

“It is like a huge wall,” said the fifth man who touched the belly of the elephant.

“It is like a solid pipe,” Said the sixth man who touched the tusk of the elephant.

“Oh!” everyone said.   There was no more fighting.   They felt happy and content that they were all right.

The moral of the story is that there may be some truth to what someone says.   Sometimes we can see that truth and sometimes we cannot because they may have a different perspective that we may not agree to.   So, rather than arguing like the blind men, we should say, “Maybe you have your reasons.”   In Jainism, it is explained that truth can be stated in seven different ways.  One should know the complete truth, and then analyze the truth from all different angles.  So, you can see how broad our religion is.   It teaches us to be tolerant towards others to their viewpoints.   This allows us to live in harmony with people of different thinking.   This is known as the Syädväda, Anekäntaväda, or multiplicity of viewpoints

According to Jain metaphysics, innumerable material and spiritual substances, each of, which is the locus of innumerable qualities, constitute reality.   Not only are there innumerable substances, each with innumerable quality, but each quality is susceptible to an infinite number of modifications.  Clearly ordinary knowledge (non-omniscient) cannot comprehend this complex reality, for ordinary knowledge is limited not only by the limited power of the senses and reason, but also by the perspectives adopted by the knower as well as by the conditions of space, time, light, and so on.

Emphasizing the limits of ordinary knowledge, Jainism developed the theory that truth is relative to the perspective (Naya) from, which it is known.  Furthermore, because reality is many sided and knowledge true only from a limited perspective, all knowledge claims are only tentative (Syät) having the form, “X may be Y,” rather than “X is Y.”

Like the blind men, each person perceives things from their own perspective.   These perspectives are determined by many factors, including socio cultural conditioning, particular place, time, light, hopes, fears and, of course, subject to the limitation of our sensory receptors

and reasoning power.   A person seeking profit sees everything in terms of gains and losses; insecure people sees threats everywhere and a person devoted to God sees everything as God’s blessed creation.

When it is understood that knowledge is limited by the particular perspective from which side it is achieved, it becomes easy to see that knowledge claims are conditioned by the limitation of the perspective that it assumes and should always be expressed as only tentatively true. Just  as  the  blind  men  should  have  been  more  circumspect,  saying  for  example,  “Standing here, feeling the object with my hands, it feels like a winnowing fan.   It may be a winnowing fan.” So should everyone understand that their knowledge claims should be asserted only conditionally.